For Unto Us A Child is Born 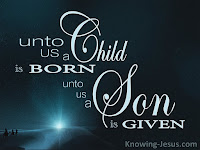 As we celebrate this day let us not lose sight of the first Christmas present ever given, that being God giving us His Son our Savior Jesus Christ to dwell with us!
So let us not get lost in all the hustle and bustle of this time of year. Instead, let us be mindful of all our blessings, and share the Christmas Spirit with others.
Remembering: THE GREATEST Gift
The greatest gift at Christmas time Is one we all may give -
A friendly smile that helps to make Life easier to live.
A kindly thought, a helping hand, To show someone we care
And let them know how much it means For us to have them here.
The greatest gift at Christmas time Costs not a lot to buy -
It's being a good neighbor As days and months go by:
It's offering a shoulder When someone needs a lift,
And so I pray this Christmas Day That this may be your gift!
Poet, Grace E. Easley
May have a Very Merry Christmas and a Wonderful, Joyful New Year!
In the love of Christ
No comments:

Be a Good Communicator

If I make one mistake more often than any other as a preacher, it is assuming more than I should about my congregation. I assume, first of all, that people want to know what the Bible says.

And having begun on those shaky assumptions, I begin building a great big sermon when the foundation has not been laid.

I’ve discovered it’s better to keep the message simple (but not simplistic), to take it a little slower and to establish a good, firm foundation. Then I can build my case.

I’ll never forget when I was asked to speak to an audience who didn’t have a lot of biblical knowledge.

I decided to start simple.

“I will be referring to passages in the Bible according to numbers,” I told them. “For example: ‘John 3:16.’ Now, the ‘3’ stands for the chapter, and the ‘16’ stands for the verse.” And Cynthia was sitting on the front row rolling her eyes like, Oh, man, they’re going to think Chuck fell off a turnip truck!

But would you believe it? I had a guy come up to me afterwards and say, “All my life I’ve been wondering what those numbers are, and what that colon in the middle was for. Now I know! That’s a chapter! And that’s a verse!”

Most people will never see the inside of a seminary. (That’s why they have hope!) They don’t know a lot of the things we think they know. And unless we keep it simple, we lose them . . . and they never will.

I received an e-mail not long ago from a friend whose teenage daughter had taken notes during my sermon and then had written my application points on her bathroom mirror. (My friend sent me the picture.)

(A teenager wrote my message points on her mirror.)

I’ve said for many years that if I can communicate in a way that teenagers get it, write it down, remember it, and then apply it—I will have accomplished something very gratifying.

Keep your stuff simple. The goal is to communicate, remember—not to impress.